There are two technical approaches to measure conductivity - inductive and contacting.

Inductive sensors are using two electromagnetic coils usually encased in a polymer ring. An alternating voltage is applied to the driving coil, which induces a voltage in the receiving coil. The induced current is influenced by the conductance of the solution. Due to the sealed casing, inductive sensors can be used in aggressive environments, but they are not suited for conductivities below 15 µS/cm. 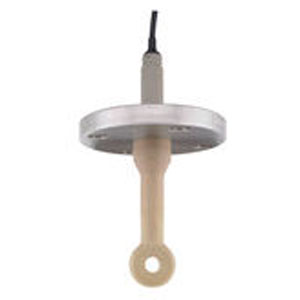 An example of an inductive conductivity sensor

Contacting sensors consist of conducting electrodes being in direct contact with the medium. The primary parameters measured are voltage and the applied current. The interdependence of both parameters, described by Ohm’s law, allows for the calculation of a resistance R (measured in Ohm [Ω]) or the inverse – the conductance G (measured in Siemens [S]). 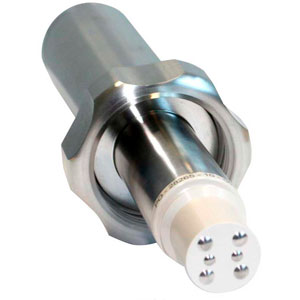 Typically, the cell constant is determined in the factory and entered into the associated conductivity meter or converter. To achieve the highest possible accuracy it is recommended to calibrate the system when installed in the process using a calibration solution having a nominal conductivity within the desired measurement range and temperature.

Between the standard unit “S Siemens” (100) and the mostly used unit “µS micro Siemens” (10-6) there is a difference of 106 = 100.000. If a conductivity sensor measures from µS up to mS (milli Siemens 10-3) up to S, it is obvious that the sensor performance cannot be the same over the whole range. That is why conductivity sensors have their accuracy linked to the measuring range.